X
This site uses cookies to provide and improve your shopping experience. If you want to benefit from this improved service, please opt-in.
More Info
Accept Cookies
Visit The MyRacekit Knowledge Base - Click Here
Free UK Delivery On Orders Over £85
The Best Gear for Your Next Adventure
myRaceKit | Blog > Races and Runners > Who Run The World? Tish!
Menu
Races and Runners

Who Run The World? Tish!

Tish Joyce, briefed us on her journey from 5k to running the world… her story is rather inspiring.

It was a New Year’s resolution following the death of my stepfather, that started my life-changing journey to Run the World. Although I had run a few marathons, I had slipped into unhealthy ways; working, smoking and drinking to excess and was struggling to run 5k. I decided to enter the Great Wall of China Marathon to force me to get fit.

For the next few months, I slowly got healthier and loved the whole training process and the self-esteem that came with it. I didn’t want to come back from China without a goal so, just before I left, I committed myself to run the Marathon des Sables, (MDS) the following year. I had never run more than a marathon and hadn’t done that for 5yrs so with the equivalent of 5 marathons across the desert in 6 days MDS was a huge challenge and I knew it would stretch me to my limits.

I completed the Great Wall in May 2016 and, despite have foot surgery soon after, and a bad fall in the desert and needed stitches the night we arrived in MDS camp, I finished the MDS in April 2017, 46th out of 234 females. It felt as good as a podium place to me, especially as the surgery had impacted training for 5 months. I learnt the power of a strong mental attitude and self-belief, never losing sight of the fact that I was going to finish.

After MDS I knew I could push my boundaries even further. I was 50, a mum, step mum and a grandmother but I felt fitter mentally and physically than ever before. I struggled to find the next ‘big challenge’ as I wasn’t as interested in organised events. I loved being in nature, running free and the whole process of setting an extreme challenge and then training my mind and body to achieve it. I wanted something to keep me focused and ensure that process continued, something that would inspire me and others. 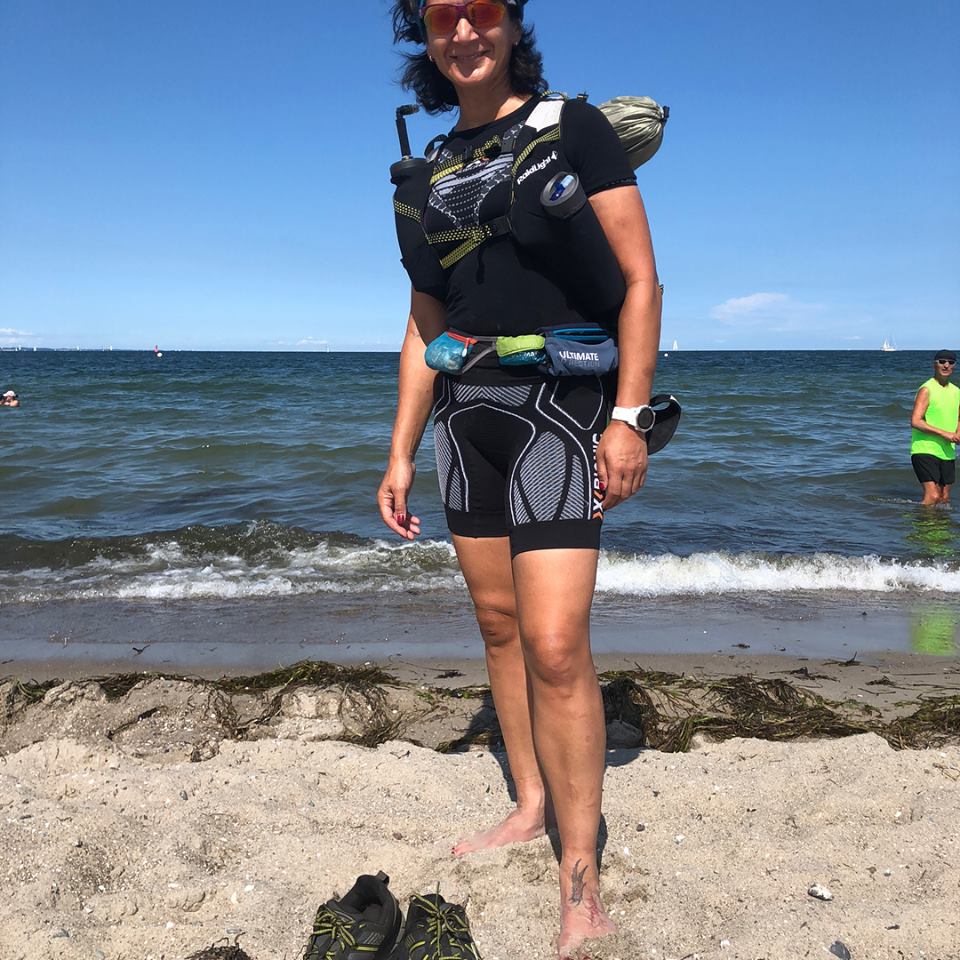 One Sunday, I looked down at my T-Shirt and read the words ‘Run the World’. That was it! I knew from that moment, in June 2017, that I was going to Run the World.

As I have a demanding full-time job, a daughter, grand-daughter, teenage stepchildren and two flat coat retrievers, life was already busy enough. I thought it would take a few years to start, but I knew I was going to do it, there was a deep sense of self-belief from the initial idea. I smiled, as I turned to the Chinese scroll hanging on the wall behind me, it read, ‘Believe in Yourself.’ I’d had it made in Beijing, just after the Great Wall Marathon and I was amazed by how my confidence in myself had grown.

A few months later, in October 2017, after hours and hours of obsessive route and kit planning, with very little time for running; I simply started to run across Europe. MDS lessons served me well as I ran 233k solo and unsupported over 5 days. I ran from Schiphol Airport, Netherlands to Essen, Germany and it was the hardest thing I’d ever done. Torrential rain,  terrible shin splints from tarmac roads and a too heavy bag and days of running alone without any support, it was so much harder for me than MDS. I learnt a lot and hadn’t anticipated how difficult it would be to self-navigate on unfamiliar roads, trying to locate accommodation when exhausted and still run another 70km the next day.

There were many tears and huge self-doubt along the way, but I’ll never forget the moment I arrived at my company office in Essen. I had completed my first ever solo multi-day run, and the longest run to work across two countries! I was so elated, and my conviction grew that this was my journey to Run the World. Almost immediately I was planning the next phase which turned out to be even harder and a few months later, in December -15’ I left the office in Essen and ran 150k to Eversberg over 4 days. It was -15’, deep now covering the trails and thick ice on the roads as I attempted to run through the Sauerland Forest. My navigation skills were poor and trying to navigate with my mobile phone was impossible in the sub-zero temperatures. I learnt how critical it is to have good quality, appropriate clothing and kit, with robust navigation devices and access to emergency support when running solo, however independent I was.

These runs were the warm up acts for the rest of Run Europe.

The final phase and main event, was the equivalent of 40 marathons in 45 days, finishing on the Latvian – Estonian border in last summer’s heatwave. Temperatures were in the late 30’s and I frequently ran out of water as I continued east across Germany and then up to the Baltic Sea. Reaching the Polish border was very emotional: knowing that I had run right across Germany. I was continually re-planning, to avoid busy roads and motorways.

Instead of crossing through Poland, I took a ferry to Ystad, Sweden and enjoyed a few glorious days running and wild camping along the beautiful coast and trails of the Skaneleden. After a ferry back across the Baltic Sea to Klapeidia, Lithuania I continued on to Latvia. I then ran the entire Latvian coast through remote forest and wild untouched beaches, until I reached the Estonian border. I carried a tent, camping when I could and staying in cheap hotels, treating myself to a day off in a nice place once a week, to replenish supplies and rest. In all I ran from the Netherlands to Estonia, 2,085 km through 7 countries. 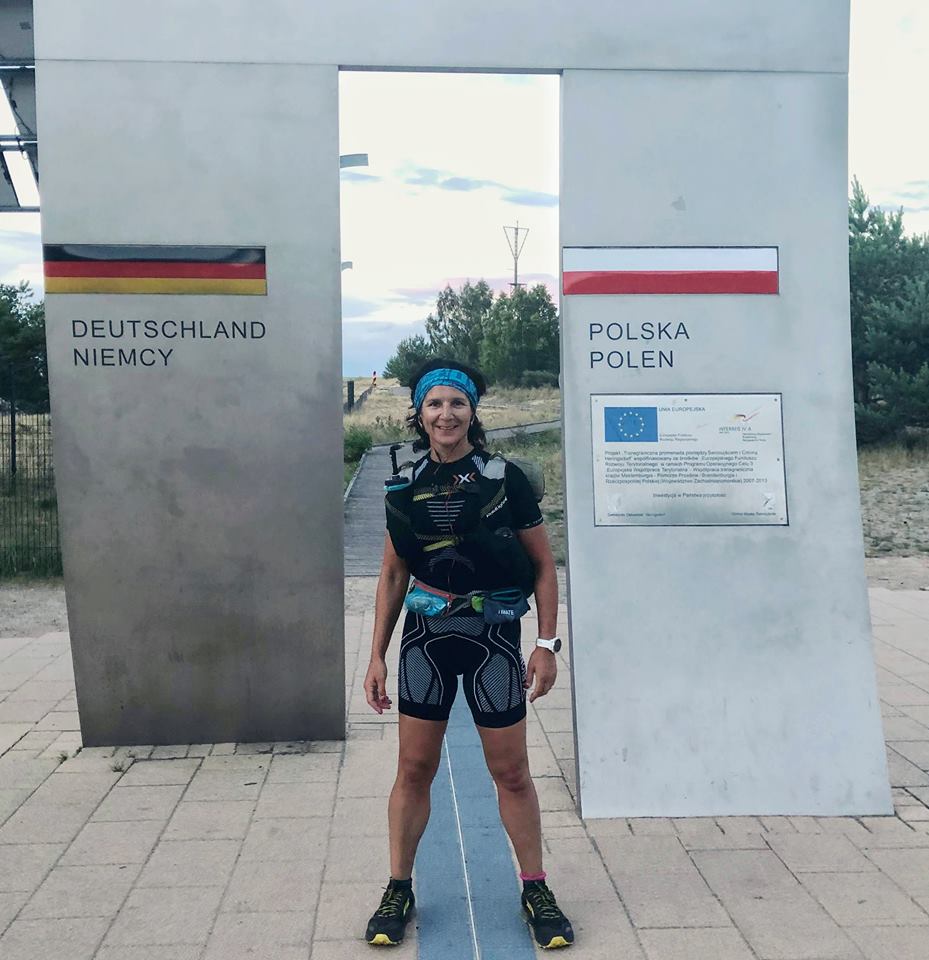 Run Europe was truly phenomenal experience, it’s hard to explain how difficult it was but also how incredible it was. I spent so much time alone, becoming more at one with myself than ever. I’m much more honest and transparent now, there is nothing left to hide. I learnt the importance of caring for my body before, during and after runs. Having practiced Chi Running for many years this was a great test; I did not have a single issue even though I often ran 50-70km a day, with an average of just over 42km a day.

I learnt what was crucial kit wise, reassessing every item in my bag on a daily basis and getting rid of anything that was no longer essential, to reduce weight. I learnt that trying to plan every step of the way was impossible, and as a natural control freak this was tough! Once I stopped trying to control everything and prove anything to anyone, it all became so much simpler and enjoyable.

Most importantly Run Europe helped me to find my voice, and now Run the World is evolving as a platform to speak up for something that I’m truly passionate about. It took until I was 50 years old to stop being ashamed about the fact that I’d been a victim of domestic violence. Suffering mental, physical and sexual abuse through a variety of unhealthy relationships. When I started running, I had low self-esteem, was embarrassed of my body and was on a never-ending roller coaster of unhealthy behaviour. The strong person I showed to the world hid my vulnerable, scared self that blamed myself for allowing the abuses to happen. By speaking publicly, I hope to encourage others to do so and to realise that whatever your past may hold, the future can be bright; you have the power to change it. Nobody should feel ashamed of being abused by his or her partner, or anybody else.

The next stage of Run the World will be Run Egypt in October this year and Run India, commencing in December. Like Run Europe these are chiefly solo runs but will be partially supported due to the nature of the terrain and local circumstances. Run Egypt will be an amazing run on Egypt’s first long distance trail. It normally takes 42 days to complete the 550km trail across the iconic wilderness of the Sinai desert, camping under the stars each night. I aim to be the first person to run the trail in around 10 to 12 days, supported by the local Bedouins. Run India will start in December 2019, and as my grandparents are from India this is hugely exciting for me. The route is still being figured out, but I aim to run South to North over a 4 to 6 week period.

Although I will be running solo, support is required in India and Egypt due to the heat, terrain and safety considerations. Logistics are more complex and costly, and I am hugely grateful to myRaceKit supporting me with my kit. My aim for Run the World is to raise awareness of the global need for change and an end to domestic abuse.