X
This site uses cookies to provide and improve your shopping experience. If you want to benefit from this improved service, please opt-in.
More Info
Accept Cookies
Visit The MyRacekit Knowledge Base - Click Here
Free UK Delivery On Orders Over £85
The Best Gear for Your Next Adventure
myRaceKit | Blog > Races and Runners > Ultra Tour Monte Rosa – How To Own A Mountain
Menu
Races and Runners

Ultra Tour Monte Rosa – How To Own A Mountain 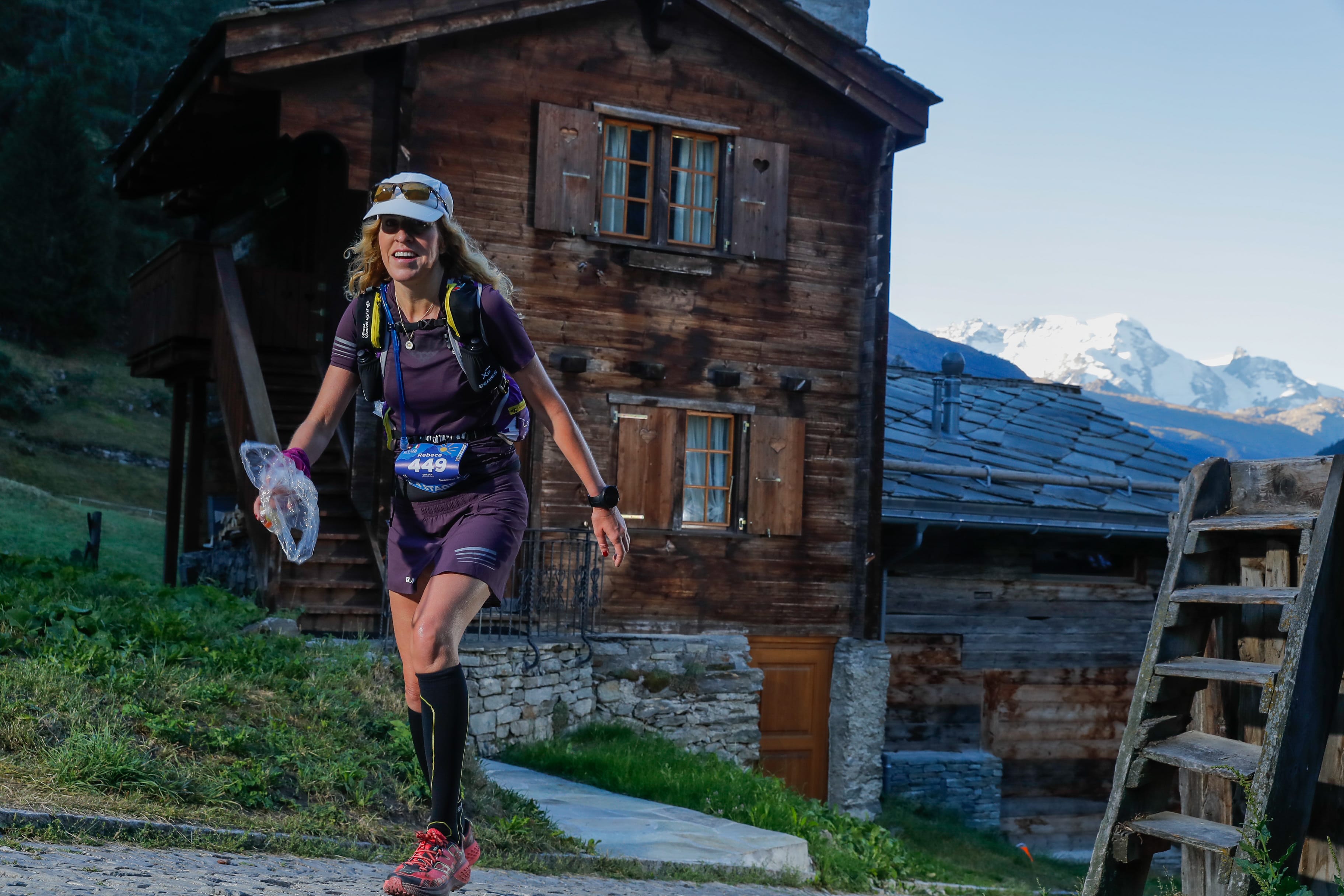 In Lizzy Hawker’s book Runner there is an episode where Lizzy has returned to Kathmandu after another monstrous run in the Himalayas. Richard Bull and she are on a rooftop, drinking milky tea and stargazing, reflecting over the question: Why do we run? Their answers are philosophical. I ask myself the very same question as I climb Colle del Turlo.  Although, my question is highly relevant; the climb is gruesome. My legs are aching. Every time I advance, turning a corner, the climb appears even longer. Do endless climbs exist? I grit my teeth. I follow a piece of advice given in Lizzy’s book, when in doubt, just put one foot ahead of the other.

Turlo, meaning small door in Walser dialect, is a mountain pass that has been in use for centuries, its impressive paved trail is a fine example of medieval labour that was then rebuilt by an alpine military battalion in the 1920s. My rule during this race was when tired; breathe in and inhale the environment. The views running around Monte Rosa are captivating. There is something magic seeing Monte Rosa from different perspectives. The beautiful surroundings give you a sense of purpose, particularly when you need it most.

A friend of mine introduced me to Ultra Tour Monte Rosa (UTMR). I had not heard of the race before, but I was quick to sign up as I adore that part of the Alps having skied and mountaineered there. The race was organised by Lizzy Hawker and Richard Bull; I’m a longstanding admirer of Lizzy and I had previously heard of Richard’s race organising capabilities; thus, the race seemed a brilliant fit. The 170km and 11,300m of ascent didn’t scare me. I opted for the four-day race which had the least onerous entry criteria. At 4,634m, Monte Rosa is the second highest mountain in the Alps and Western Europe. It is located between Switzerland (Valais) and Italy (Piedmont and Aosta Valley). Grächen in Switzerland is the start and finish of the 170km race. Grächen is a picturesque host village displaying warm hospitality towards the runners. The tour takes you from Grächen to Zermatt, Zermatt to Gressoney la Trinité in Italy, from Gressoney to Macugnaga and finally from Macugnaga you climb the almost vertical Monte Moro Pass before descending to Saas Fee and the final stretch back to Grächen.

Ahead of the race, I read that trekkers were recommended to complete the tour of Monte Rosa in about 10 days. The pace of UTMR is more ambitious with a 170km single-stage, a 170km four-day stage and a 100km single stage on offer. There are cut off times. If you plan to walk the race at a leisurely pace you won’t make these. The circuit follows many ancient trails that have linked the Swiss and Italian valleys for centuries. It includes larch forests, alpine meadows, balcony trails and a glacial crossing. The course is runnable, but at times highly technical. It connects seven valleys embracing different cultures: the German-speaking high Valais, the Arpitan speaking Aosta Valley and the Walser culture with spectacular wooden houses in Otro Valley in Piedmont.

The race organisation is diligent, thoroughly checking the mandatory equipment of all participants. This is needed as the circuit takes you to remote areas. At one point there was almost 25km between aid stations. I ran alone during parts of the race, truly enjoying the solitude and vastness. The climb after Rifugio Ferraro reminded me how small the human is when pitted against the forces of nature as the skies opened and deluged me. At +2,000m, wearing shorts and a t-shirt you get cold immediately and the trails turn slippery. Mountains are inviting but can be treacherous. Safety is paramount for the organising team. 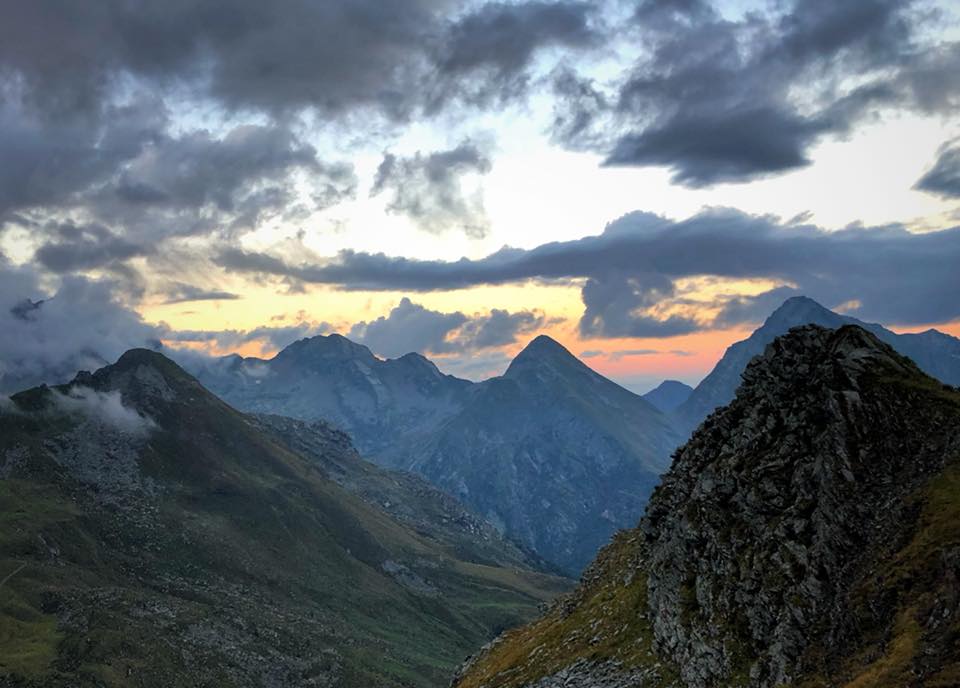 The four-day race includes three overnight hotels; the organising team allow runners to send 15kg of luggage on to the next overnight stop, which was much appreciated. Meals are provided and, maybe as expected, the Italian meals were outstanding. The hotels are comfortable and accommodate the runners with early breakfasts. Along the route, the aid stations were well stocked and manned by immensely friendly volunteers.

There was sunshine, cloud and rain during the race. In the valleys, during the afternoons it was +20C, when crossing the glacier at the Theodul Pass it was minus degrees. A good tip is to bring newspapers which can be used to dry your shoes overnight.

This is a challenging race that takes you to your limits. For the first time, I found myself crying as I reached an aid station out of pure exhaustion. Likewise, I felt sheer, unconditional happiness at the summit of each climb, taking in the extraordinary views. The mountains drain you on energy, but you gain something extremely valuable in the form of enormous, indescribable fulfilment.

UTMR is a surprisingly small race, maybe because it is squeezed in after UTMB week and coincide with the Transalpine and the Tor des Geants. The race feels very genuine and uncommercial with the sole wish of the organisers being for the runners to enjoy their trail experience and nature. This humble attitude showed during the post-race celebration dinner when the master of ceremonies called on Lizzy and Richard to address the runners. The microphone got passed between the pair until they expressed that they were simply happy if the runners had enjoyed the race. It was as if they were almost surprised anyone pitched up to run their race. This race is a hidden gem in the race calendar.

After a last-minute cancellation of the friend who introduced me to the race, I turned up alone in Grächen, however, I became good friends with a German lady I shared a room with. The spirit was incredible across the many nationalities and I was for four days immersed in this big running family, where everyone wanted their fellow race participants to enjoy the race.

So why do we run? In Lizzy’s book, Maya Angelou is quoted saying: “You are only free when you realise you belong no place – you belong every place – no place at all.” Lizzy concludes that all of those places that belong to no one – belong to us all. If we explore them we make them our own.

I experienced Monte Rosa as my own mountain. I enjoyed it so much I’m planning to be back in 2019 – only I intend to run it better.