X
This site uses cookies to provide and improve your shopping experience. If you want to benefit from this improved service, please opt-in.
More Info
Accept Cookies
Visit The MyRacekit Knowledge Base - Click Here
Free UK Delivery On Orders Over £85
The Best Gear for Your Next Adventure
myRaceKit | Blog > Races and Runners > A Report from Badwater 135
Menu
Races and Runners

A Report from Badwater 135 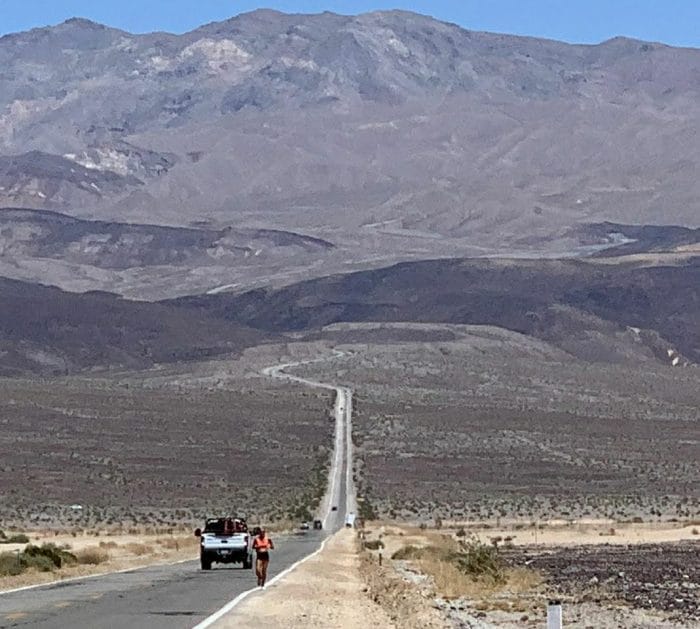 Badwater 135 brands itself as the world’s toughest ultra. Rebeca finds out why?

The 135-mile (217 km) non-stop Badwater race from Death Valley to Mount Whitney, California is so popular that it is a project in itself to get into the race. Prospective runners must build their running CV by completing Badwater rubber-stamped 100 milers and ideally having crewed at Badwater 135 for one year.

Badwater 135 is a road race. The start line is at Badwater Basin, Death Valley, which marks the lowest elevation in North America at 85m below sea level. The race finishes at Whitney Portal at 2,530m above sea level, which is the trailhead to the Mount Whitney summit, the highest point in the United States. The scenery is truly unique and so is the running environment. The course covers three mountain ranges for a total of 4,450m of cumulative vertical ascent and 1,859m of cumulative descent. Between the climbs, there are long, straight sections through the desert that appears to last an eternity. In case the altitude differences sound frightening, add the heat. 2019 was considered a ‘cold’ year with the Tourist Information at Furnace Creek, the hottest place on earth, measuring 53C. Although runners set off in the evening in three start waves at 8 pm, 9.30pm and 11 pm the temperature also at night-time held up close to the 50C mark. Night-time, it is also windy. Imagine having a massive hairdryer at full power blowing at your entire body with no escape to cool off- this is the Badwater running weather.

In Europe, it is unusual for runners to have a support crew. At the Badwater 135, every runner needs a crew. The race is self-sufficient, so the crew provides drinks, nutrition, spare clothing and cooling services to the runner. After the first 42 miles, runners can have a pacer. The crew also paces. I crewed for Ray Sanchez, who is an experienced Badwater 135 runner, participating for his 12th time. Despite this wealth of experience, Ray acknowledged the challenge of Badwater. Ahead of the race, he stressed the importance to keep cool saying that at these temperatures the body bakes from the inside and once you overheat it is almost impossible to cool down. The excessive sweating means replenishing of minerals continuously.  Strategies to keep cool included filling drink bottles with 90% with ice (all water within an hour) and storing ice on the body while running. However, the latter is a delicate matter as too much ice that turns into water turns into chafing. There are stories about shoes melting on the Badwater route tarmac. I did a rookie error bring a water reservoir. The water turned almost boiling in the rubber bladder quickly.

Ray completed 34h 28min and we stopped every mile to support. Panamint Springs half-way was the main refuelling point where a convenience store is available. We consumed two fuel tanks for the van, 32 large ice packs and 65 litres of water for the runner and crew during the race.

The race is capped at 100 participants. You quickly understand why the organisers need to limit the participant numbers. Death Valley is a desolate area. Runners share the dwindling, steep, dual carriageway that lacks a hard shoulder during many sections, with all traffic travelling through Death Valley. While some drivers are very considerate cheering the runners, many are not speeding through the desert. During a couple climbs the road is so narrow it is impossible to park the crew van. As an ultrarunner, I have seen many exhausted runners. With the heat, runners turned delirious and dehydration is not a joke. One of the fittest ladies that I have ever seen, turned into Michelin man almost unconscious with swollen limbs due to lack of fluids.

In order to run Badwater 135, crewing is encouraged and runners should complete recommended races from the Badwater list. Adventure Corps, who organise Badwater, have a section on their website called Badwater University full of useful advice.

When I first arrived in Death Valley, I felt incapacitated by the extreme heat. You need time to adjust and to check how your body reacts. The acclimatisation and preparation needed are not to be underestimated. Taking part as a crew is very sensible to know what to expect.

No doubt Badwater 135 represents a huge challenge. Apart from the exceptional landscape, there is a strong community among the runners, crews, volunteers and organisers that is uplifting. This is a race to add to the bucket list.